March was a good month for home sales in Albuquerque, while the numbers for Rio Rancho were outstanding.

Due to the cyclical nature of real estate, this report compares sales stats year over year, not month over month. These are not the official numbers from the board of Realtors, although the information in this report does come from the Southwest MLS.

Rio Rancho home sales were up 35% in March. 167 home sales have been reported so far, up from 123 closed sales this month last year. REO (foreclosure) sales increased from 19% of closed sales to 21%. However, short sales declined from 9% of the market last year to slightly over 7% this year.

Home sales increased considerably in Corrales and Los Lunas, but stayed the same in the east mountains and Plactias.

As the supply demand ratio and absorption rate charts from February show, the market is challenging for home buyers right now, with few homes to choose from, especially in the lower price ranges and more popular areas. 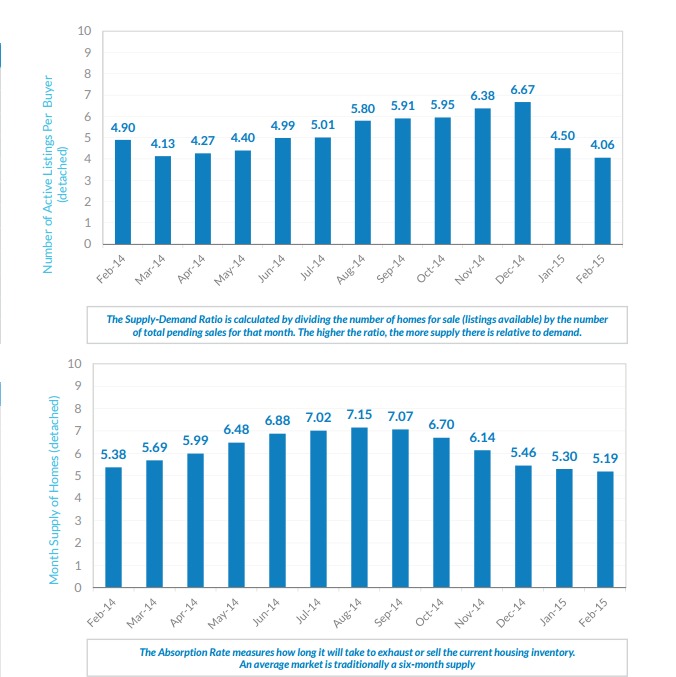 That means it's  great time to sell, but you'd better hurry and get your home on the market before everyone esle does. Home inventory tends to peak in June and July.

by Albuquerque Realtor Rich Cederberg, eXp Realty (505) 803-5012. These are preliminary stats based on the MLS sales that have been reported so far, as of  December 5th, 2014. A small handful of lingering sales may be reported.

Special note: the numbers reported in the news media are usually for the metro area as a whole. My monthly reports break down the sales by city. Indeed, the Albuquerque and Rio Rancho real estate markets frequently behave differently.

These Albuquerque real estate statistics were provided by the Greater Albuquerque Association of REALTORS®data on 12/05/2014. This data is reflective of homes which were listed on the Albuquerque MLS; private sales are not included.